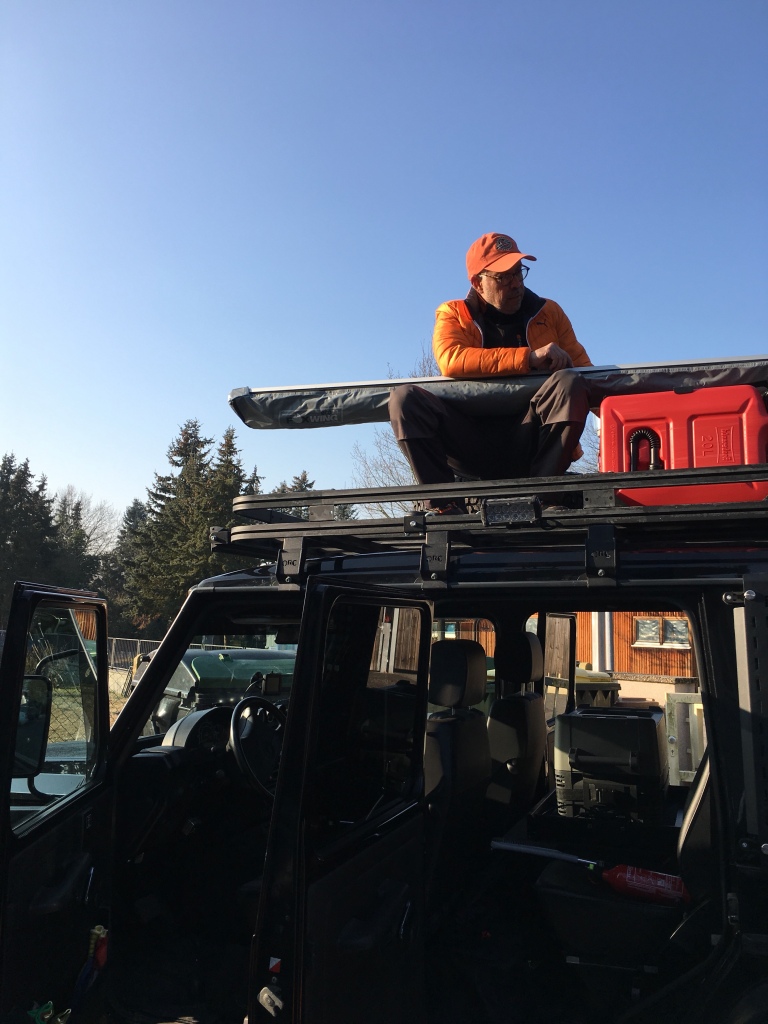 When on the road for a longer time it may be good to have one or several base camps just in case anything happens.

So I startet out on my trip not knowing how important this would get.

Due to bad weather the ship with the verhielte and trailer was about a week late. I was already in Baltimore at the time this became evident but didn’t have much to do. So I decided to drive to Cleveland with a rental car and visit my cousin Christian Knapp and his family there and „kill some time“. Luckily they gave me „shelter“ in the lovely home in Shaker Heights. Unusual for this time of the year we had lots of sunshine and no snow.

Although I thought I had planned everything I was missing things as soon as I left home. Other things turned out to be useless and I was happy to get rid of them.

So when Petra joined me in Florida after about 2 months into the trip she brought things I was missing and took home a load of things I didn’t need. Good for me. Although I would have liked if we could have done the whole trip together it turned out to be good to have the home base working as I needed spare parts for the car, communication with doctors and health insurance etc. Other overlanders will rent out their homes or sell them … not an option in my situation with a „critical“ health status. Although I did not think it would happen – it did happen and I had to return home for surgery some time in April 2017. So it was good to have a home to return to. Further therapy was needed lasting almost 3 months in July , August and September and again I was happy to be home for this treatment.

Bills keep coming in until today and Petra is taking care of everything. Good for me. I would not be able to do so.

While I was in Germany I was lucky to have another basecamp with my cousin Barbara Healey and her family. So I drove down from Vancouver in one day , dropped the vehicle and trailer in front of their house and took off the next day for several doctors appointments the day after I returned to Frankfurt.

It is also good to be able to get appointments at the Oral and Maxillofacial Surgery Department at the University Hopital Heidelberg by email and short note ! Outstanding ! Thanks to Prof. J. Hoffmann and his team that has always been possible ! So that’s also a „basecamp“ in some ways.

After I returning from Alaska another interruption of the trip was necessary and again I could count on the family in Portland and their friends Michael Galassi and Kathy Hamm who have a large piece of land which was good for safe storage of the vehicle and trailer for three months. When I returned to Portland I was planning to continue on the trip shortly but ended up staying with them for 3 weeks due to problems with the vehicle (as posted) earlier and the need to ship parts from my friends and further basecamps ORC off-road center and EDOC performance. I am well aware that usually if you have relatives visit you’re happy when they leave after a couple of days. So I am thankful for that and I think we all had a pretty good time.

Later in the trip , again to return home for a shorter period of time, I could count on my aunt Edda Knapp who had meanwhile moved from Cleveland to Las Vegas (not for me though ;-)) and stay in her house and park my rig there.

Petra and I were going to meet in Cancun, Mexico again. Good for me that she could bring all the parts needed to get the hitch, trailer and everything going again ! Finally my father who wanted to join in for some time also brought some missing parts with him .

I am thankful for all the help and support I could and can always count on ! Without I would have been in some bigger trouble !

I  like to let my family and friends and also everyone interested be part of my travels – enjoy !